Pope’s appeal to pray, reflect and act to safeguard creation 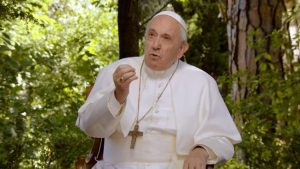 “Now is the time to rediscover our vocation as children of God, brothers and sisters, and stewards of creation.” Those were the Pope’s words in a message released for the World Day of Prayer for the Care of Creation, which is observed on 1 September.

Taking inspiration from the Book of Genesis, Pope Francis describes God’s gaze as “resting lovingly on his creation”.

But he goes on to say that, “tragically, the human response to this gift has been marked by sin, selfishness and a greedy desire to possess and exploit.”

“Egoism and self-interest”, he says, “have turned creation, a place of encounter and sharing, into an arena of competition and conflict.  In this way, the environment itself is endangered”.

Increased environmental deterioration in our world

In his message the Pontiff highlights how the world has experienced increased deterioration in recent decades.

He points to constant pollution, the continued use of fossil fuels, intensive agricultural exploitation and deforestation, which he says, “are causing global temperatures to rise above safe levels.”

The Pope also notes the increase in the intensity and frequency of extreme weather phenomena and the desertification of the soil, which, he adds, “are causing immense hardship for the most vulnerable among us.”  Pope Francis continues by saying that “melting of glaciers, scarcity of water, neglect of water basins and the considerable presence of plastic and microplastics in the oceans are equally troubling, and testify to the urgent need for interventions that can no longer be postponed.”

In effect, the Pope writes “we have forgotten who we are: creatures made in the image of God.

The World Day of Prayer falls at the start of the Season of Creation, an ecumenical initiative which runs until 4th October, the feast of St Francis of Assisi. During this time the Pope is inviting the faithful to pray, reflect and take action.

Pope Francis underlines that “this is the season for letting our prayer be inspired anew by closeness to nature, which spontaneously leads us to give thanks to God the Creator.” Our prayers and appeals, he says, “are directed first at raising the awareness of political and civil leaders”, especially those governments “that will meet in the coming months to renew commitments decisive for directing the planet towards life, not death.”

During this month, the Pope says that it is “a season to reflect on our lifestyles, and how our daily decisions about food, consumption, transportation, use of water, energy and many other material goods, can often be thoughtless and harmful.”

Now is the time, he adds, “to abandon our dependence on fossil fuels and move, quickly and decisively, towards forms of clean energy and a sustainable and circular economy.  Pope Francis also invites people to learn from “indigenous peoples, whose age-old wisdom can teach us how to live in a better relationship with the environment.”

In the message the Pope urges the faithful undertake prophetic actions.  “Many young people all over the world are making their voices heard and calling for courageous decisions”, he comments.

Pope Francis stresses that, “we owe them real answers, not empty words, actions not illusions.”

Concluding his message, the Pope mentions two major events that will take place over the coming months:  The United Nations Climate Action Summit and next month’s, Synod on the Amazon region, “Let us take up these opportunities to respond to the cry of the poor and of our earth”, he says.