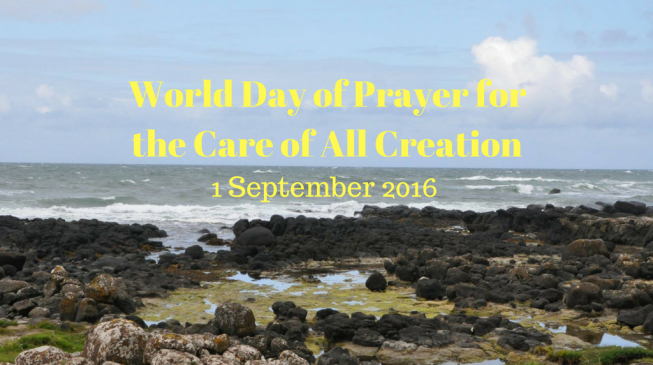 The second World Day of Prayer for the Care of All Creation takes place on 1 September 2016. Many local Church communities around the world also are preparing to mark Creation Time, which begins tomorrow 1 September and continues until 4 October, the Feast of Saint Francis of Assisi. Creation Time celebrates the joy of creation and encourages awareness-raising initiatives to protect the natural environment.

The World Day of Prayer for the Care of All Creation was celebrated across Ireland last year at the invitation of the Holy Father Pope Francis. The importance of caring for all creation was highlighted by Pope Francis in his encyclical letter Laudato Si’ (Praise Be), published in June 2015. In his encyclical, Pope Francis appealed to every person living on our planet to take care of our common home. He also called on us to think of those who are most acutely feeling the consequences of environmental degradation and destruction. These are some of the poorest and most vulnerable populations in the developing world. The injustice is all the greater since those affected have contributed least to the exploitation of the earth’s natural resources.

The Pontifical Council for Justice and Peace proposed that the World Day of Prayer provides an opportunity for repentance for the ways in which our lifestyles may be contributing to the suffering of others. They said that we need to have the courage to hear the cry of the poor and see how this is connected to the cry of the earth.

Pope Francis reminds us that, “We need a conversation which includes everyone, since the environmental challenge we are undergoing, and its human roots, concern and affect us all.” He points  to our throwaway culture and asks that, “Humanity is called to recognize the need for changes of lifestyle, production and consumption, in order to combat this warming or at least the human causes which produce or aggravate it.”

The Holy Father, Pope Francis, has prepared a Message for the celebration of the second World Day of Prayer for the Care of Creation, 1 September 2016. It is entitled Show Mercy to our Common Home. From its very title, the Message situates our living-out of Laudato Si squarely within the Jubilee Year of Mercy.